My whole life has been a continual battle with low self-esteem. It stemmed from sexual and verbal abuse as a child and the enemy speaking daily, without my knowing it, these self propagating curses: (I’m not as good as others; I’ll never go forward like I want to and I will always be hindered with something in my way; I’ll never look or feel right; I’ll not measure up-I’ll always be second class or substandard; I’ll never know the right things to do in social situations; I’ll be inferior and will always be that way.) Also because of the sexual abuse, sexual disorientation was brought in with thoughts that sex is not fun-it only brings in fear, pain, it’s nothing to be desired, low sex drive, men are no good etc. This sexual inroad brought in physical problems for me and gave the enemy an area to work through to try to break up our marriage (an assignment). The reason they worked so hard on trying to bring in low esteem was to keep me from walking in what The Lord had for me to do. The gifts, anointing and fruit in my storeroom included teacher, healing, evangelist, preacher, deliverer, encourager, intercessor, help mate to Daryl etc. The enemy wanted me to be so focused on turning inward with self pity, feelings of failure, depression, insecurity, being a lone ranger and dwelling on physical things bothering me that my faith would be wiped out (Faith would be needed for the call to healing and intercession especially) and frustration, doubt and unbelief would be ushered in, and I would have no hope. Eventually they wanted me to try to take my life.

The session revealed the enemy had four (4) death grips on my life. One death grip was on both of my wrists. The session showed me that 100% of my problems with my wrists was the enemy lying to me. I had a weakness sometimes so much that I couldn’t even pick up a skillet without almost dropping it or having to support it with both hands. A few years back ago I went to the clinic and had an x-ray to see if I broke or cracked one or both somehow. They found nothing. [Another lying symptom, but not a death grip, was heat exhaustion-inability to stand the heat in the summer-100%] There were two (2) death grips on the bowels with cancerous tumors planned. The session confirmed again that it was just the enemy trying to get me to focus on my body (not on God’s call for me) and start thinking that it was breaking down-that my body was going to wear out before I finished what God had for me to do, to cause doubt to come in because I would be looking at my symptoms so much. But it was also revealed that God was protecting me and even telling the enemy when to back off It was revealed that despite everything the enemy put in my path, he wasn’t succeeding. They were only stumbling blocks that made me stronger–the head demon admitted his time bombs only blew up in his face.

This session showed me that God heals areas we don’t even know about. I was born with a heart problem (another death grip) that God healed. The enemy said he didn’t want me born.

Two (2) more death grips were planned for my mind with a stroke (front and back) so I wouldn’t be able to talk, think, or help people. The enemy also put a block on my talking and thought patterns after I married Daryl. He short circuited my thought process which brought in confusion and I couldn’t organize my thoughts or get them to come out right which added to my frustration and low self esteem. If I couldn’t talk right or get my thoughts straight, I wouldn’t speak much and affect people for God’s kingdom. It increased my low esteem and also caused strife in our marriage. It was also revealed that Daryl’s prophetic gift and encouragement for me was helping me so much I wasn’t listening to the demonic influences as much and what they were trying to make me believe–that I was getting too much help from other people too and wasn’t listening to him and his lies like I used to.

At one time the enemy had encapsulated 100% of my emotions. My emotions at the Freedom Encounters session start showed only 30% encapsulation.. Personally I feel this confirmed that pressing in with Life ministry, plus prayer, pushed back the enemy. I also feel because of all the work done in getting rid of lies, dealing with memories and unforgiveness etc, that it made our Freedom Encounter session shorter.

The enemy had a spiritual blockage on my Bible reading also. If I knew scriptures I would help too many people, and I’d be too effective they said. There was a band around my head holding me back. The band was broken. My whole life as a Christian I’ve read the Bible because I knew I needed to read it, but I did it out of duty. I’ve only known a ‘thirst’ for The Word a season when I first got saved. I have seen some changes in reading, but I’m looking forward to more “thirst” coming in.

Through this session I saw how effective my prayers were for my family especially. The enemy has assignments. After he was finished with what he wanted to do with me, he said that he was only permitted to go to peripheral members of my family-not my children- because I was praying for them. It spurs me on to pray even more knowing what was brought out in the session.

My self-esteem is growing in leaps and bounds now and I am truly feeling that I have been set free. I am experiencing more inner peace than I ever have before. My physical appearance is improving and how I think about myself. I am more confident. I can praise and worship today like I have never worshiped before. I feel FREE! Knowing the areas the enemy targeted before now helps me to stop attacks a lot quicker. I can be so much more effective in the areas where God has called me. I am able to be more positive and to see things differently. I feel, because of what was done in Freedom Encounters, the Lord now can do more inner healing that still needs to be done.

With Freedom Encounters we noticed some immediate differences. On the humorous side the very next morning getting ready for work we saw the first difference. In the mornings especially I’m usually very much business-like, matter of fact, in my talk with “Get it done”, “Let’s go.” [not very sweet]. That morning Daryl said, ” Sweetheart, where is the juice?” And I said in a casual voice, “Well, sweetheart, it’s right here!” And we both just looked at each other in pleasant surprise. We knew that something good had happened.

I am so thankful for The Lord and His sovereignty. He is in control. No matter what the enemy has planned for His people, the Lord will turn it around for His glory and His purposes. All those plans of the enemy for my demise have been negated. Thank you, Jesus! I would encourage everyone to have their own Freedom Encounter. He is getting His bride ready! The Bible says that you will know My children by their fruit and you will see the good in Freedom Encounters also by it’s fruit. 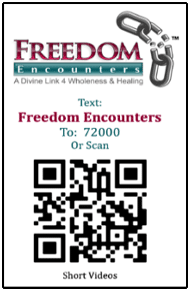